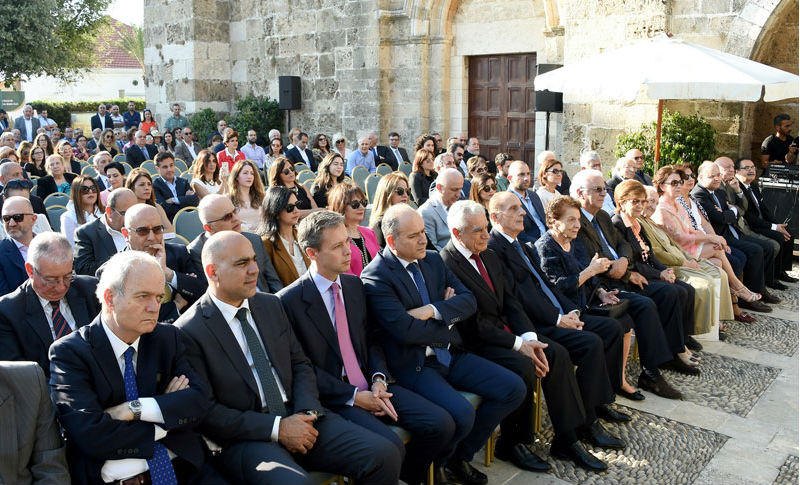 Byblos may be ancient, but the Cardahi family has breathed new life into the city through their partnership with LAU. The family gathered with LAU officials, local dignitaries and members of the community on Tuesday, May 15 to celebrate the inauguration of the LAU Louis Cardahi Foundation at the St. Jean-Marc Church in the historic city. (watch video).

The foundation became an LAU entity after a generous donation by the Cardahi family in 2013. Since then, under the supervision of the foundation’s Governing Board and with the collaboration of the Municipality of Byblos, the Cardahi Museum – a historic, Ottoman-style house right on the bay – has been renovated and is now open to the public.

The museum is stocked with historical artifacts (many of which are part of Louis Cardahi’s personal collection), iPads showing documentary films and pictures, a library with over 1,500 works charting the evolution of Byblos, the Umayyad Exhibit, and a multi-function room with a painting collection by famed Byblos native Joseph Matar.

During his opening speech, LAU President Joseph G. Jabbra memorialized the late Louis Cardahi, who dedicated his life to the success of Byblos, the city he loved. Cardahi was active in the city, co-founding the Cultural Council of the Jbeil Region, and initiating and financing the first secondary school in Byblos in the 1960s. Jabbra noted that through the establishment of the foundation, Louis Cardahi’s family has continued his goals of educating youth, making Byblos a United Nations World Heritage Site, and promoting knowledge of the city’s culture and history.

Jabbra emphasized that LAU stands within the community, contributing to and participating in the growth and development of Byblos. He noted that it is for this reason that the Cardahi family entrusted the foundation to LAU, knowing that it would continue the work started by Louis Cardahi.

Addressing the family, Jabbra said, “LAU is committed to carrying the torch that you got from [Louis Cardahi] and you gave to us; it is a gift that we will continue to cherish.”

For Rachid Chamoun, foundation director and interim chair of LAU’s Department of Architecture and Interior Design, “The role of the foundation is to carry on the vision of the founders and treasure this beautiful stone house and its grounds overlooking Byblos, the long-lived city, whose historic evolution is the foundation’s focus.”

In collaboration with local partners including the Municipality of Byblos, the Safadi Foundation, the Lebanese Syndicate of Tourism, and the Lebanese Ministry of Culture, the foundation promotes, sustains and endorses cultural tourism sectors, as well as social and economic benefits for the interactive network of historical cities of Lebanon.

The foundation’s international partners were represented at the event by Juan Miguel Cid Muñoz, who is the public relations, culture, and communications director of the Mediterranean Rim Countries of the El Legado Andalusi. Working jointly, they have undertaken three major projects funded by the European Union focusing on the Umayyad Route, the Phoenician Route, and the War-Free World Heritage Listed Cities.

Guests were invited to tour the foundation’s facilities and museum, followed by a reception in the church courtyard.

Launching ceremony of the LAU-Louis Cardahi Foundation in Jbeil downtown.